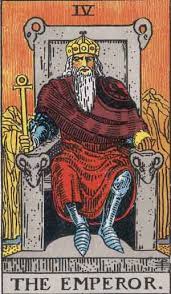 It’s all about control when it comes to the Emperor, for this card means authority, regulation, organization and a fatherliness. The Emperor represents a strategic thinker who sets out plans that he must see through. He is a symbol of the masculine principle - the paternal figure in life that gives structure, creates rules and systems, and imparts knowledge. Where the Empress's desire for their kingdom is to create happiness, the emperor desires to foster honor and discipline. He guides with a firm hand, following the calling of the crown above all else. Though he is a ruler, he understands that to reign is also to serve - thus he acts rationally and according to what is for the greater good of the kingdom.

We’re listening. Feel free to contact us if you have any questions.